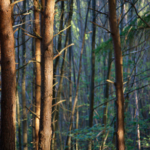 "So if you wanted to target people similar to those who bought from you in the United States, Australia, Canada, United Kingdom and Spain, you’d need to create those five individual audiences and combine them in your targeting."